In Thailand we have a lot of Toey-Hom or "Pandanus Odoratissimus" We use this plant for cooking, it's a kind of herb too. 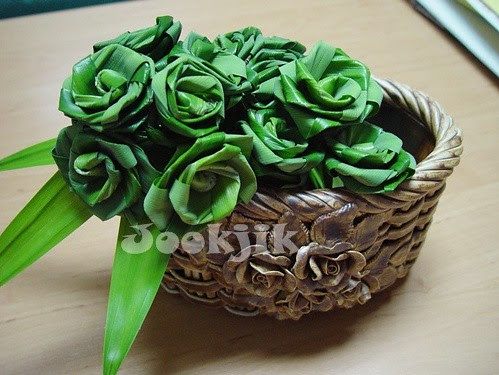 This pandan has been introduced into the Philippines and is cultivated as an ornamental. It occurs in India, Persia and Arabia and is cultivated in Malaya. It is usually planted in pots; and in this country does not grow over one meter. As far as is known it has never flowered of fruited in the Philippines. In this country the leaves are cooked with rice as a perfume, for they impart to it the smell of new rice. Its leaves are also used to flavor ice cream and sherbets.

According to Chopra the plant contains essential oil, bitter and aromatic; and is used as purgative and for leprosy. Nadkarni states that the perfumed oil, called Kevda oil, is extracted from the floral bracts. The oil is considered as a stimulant and antispasmodic and is used in headaches and rheumatism. He recommends, in epilepsy, a powder made from the anthers and tops of the bracts; another powder, made from the interior of the anthers, is inhaled or smoked as a cigarettes to cure sore throats. He further adds that the root, brayed in milk is used internally in cases of sterility and threatened abortion. Dymock, Warden, and Hooper recommend it for leprosy and smallpox. They also report that it is considered by Mohammedan physicians to be cardiotonic, cephalic and aphrodisiac. The ashes of the wood are said to promote the healing of wounds, and the seeds to strengthen the heart and liver. The oil is valued as a perfume, and is used in India as a remedy for earache and suppuration of the meatus. It has also antiseptic properties, according to Bocquillon-Limousin comparable to those of Eucalyptus oil. Menaut reports that the roots are diuretic, tonic and depurative. The oil enters into the preparation of cosmetics, according to Menaut and Corre and Lejanne.
Posted by jook2007 at 06:27 No comments: